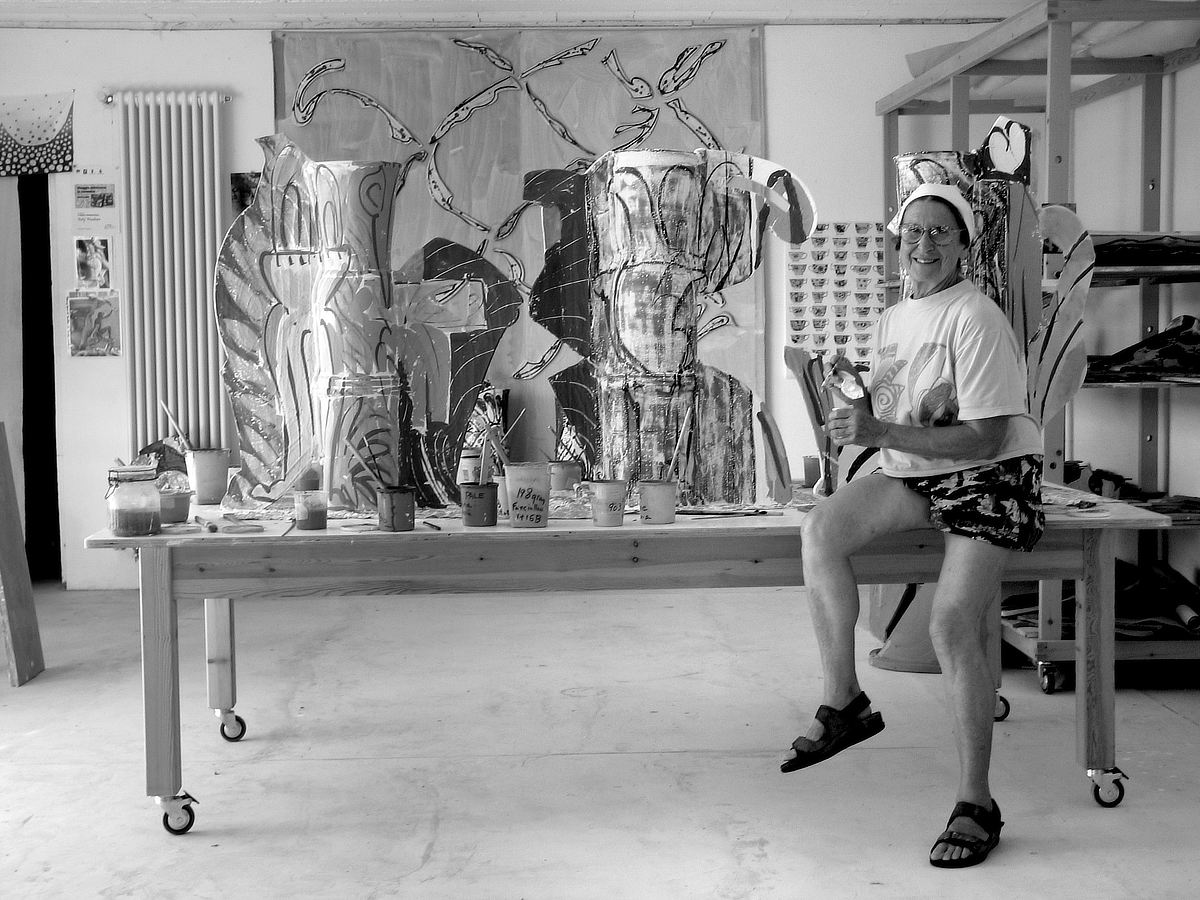 "My work for the past 50 years or so has been involved with a sort of “setting the stage” for a performance. At times the theatrics happened at breakfast, dinner or tea; at times the scenery has included flowers in vases in architectural settings. References to other works of art have also always been present as a constant in my practice. Such work is intended to be read with the inclusion of our knowledge of other works of art. These have ranged from Korean folk art painting to Matisse and Bonnard to Classic Greek and Roman vases. Recently, I have been looking at Roman Frescos and various other wall paintings where images of architecture are painted on the actual walls. These give the illusion, with their columns and windows, of architecture within architecture. I have also observed how often these frescos include images of vases…There are a series of cross-references in ceramic, wood, glaze and paint which return us to the “theatrical” domain of the wall pieces. We go to the theater to see plays and “play” is fundamental to the spirit of my recent work. Character, mise en scene, costume, plot and denouement are all important here. I am playing with play."

Betty Woodman (1930 - 2018) began her nearly seventy-year engagement with clay in the 1950s as a functional potter with the aim of creating beautiful objects to enhance everyday life. In the 1960s, the vase form became Woodman’s subject, product, and muse. In deconstructing and reconstructing its form, she created an exuberant and complex body of ceramic sculpture, drawings, and prints. Their signature is her reflection of a wide range of influences and traditions and an inventive use of color. Many of these traditions Woodman experienced first-hand: she traveled extensively, finding inspiration in cultures around the world.

Woodman was born in Norwalk, Connecticut, raised in Newton, Massachusetts, and studied ceramics at The School for American Craftsmen in Alfred, New York from 1948-1950. She traveled to Italy for the first time in 1951, solo, having worked to save just enough money to buy an ocean liner ticket. Woodman found her way to Fiesole, and an unplanned apprenticeship in the studio of Giorgio Ferrero and Lionello Fallacara that altered and clarified the course of her work. She returned to Italy several times in the 1950s and 60s. She married George Woodman in 1953 and they moved to Boulder, Colorado in 1956. She returned to Florence in 1966 when she received a Fulbright-Hays Scholarship. In 1968, she and George bought a farmhouse in Antella, Italy, which profoundly affected her work and where they and their children spent significant time throughout their lives.

Woodman had her first one-person exhibition at the Joslyn Art Museum in Omaha, Nebraska in 1970. She taught at the University of Colorado, Boulder from 1978 - 1998 and later became Professor Emeritus. When she and George bought a loft in New York City in 1980, she decided to stop making functional pottery and began showing her sculptures at contemporary galleries in New York and Los Angeles.
‍
Numerous awards followed including National Endowment for the Arts Fellowships in 1980 and 1986. In 1992, Woodman had solo exhibitions at the Wadsworth Atheneum, Hartford, Connecticut and Institute of Contemporary Art, Philadelphia. She received a Rockefeller Foundation Fellowship at the Bellagio Study Center, Bellagio, Italy in 1995 and had her first major international solo museum exhibition at the Stedelijk Museum, Amsterdam in 1996. From 1998 until her death, she lived and worked between New York and Antella. Woodman was the subject of the first solo exhibition by a living woman artist at the Metropolitan Museum of Art, New York in 2006. She received honorary doctorates from the Nova Scotia College of Art and Design in 2006, University of Colorado in 2007 and Rhode Island School of Design in 2009, as well as the Brooklyn Museum Modernism Award for Lifetime Achievement in 2008. Woodman completed major commissions at the U.S. Embassy in Beijing for the State Department’s Art in Embassies program in 2008 and the U.S. Courthouse in Jefferson City, Missouri through the General Services Administration in 2012. Major solo exhibitions followed at the Institute of Contemporary Arts, London in 2016 and K11 Art Foundation, Shanghai in 2018.