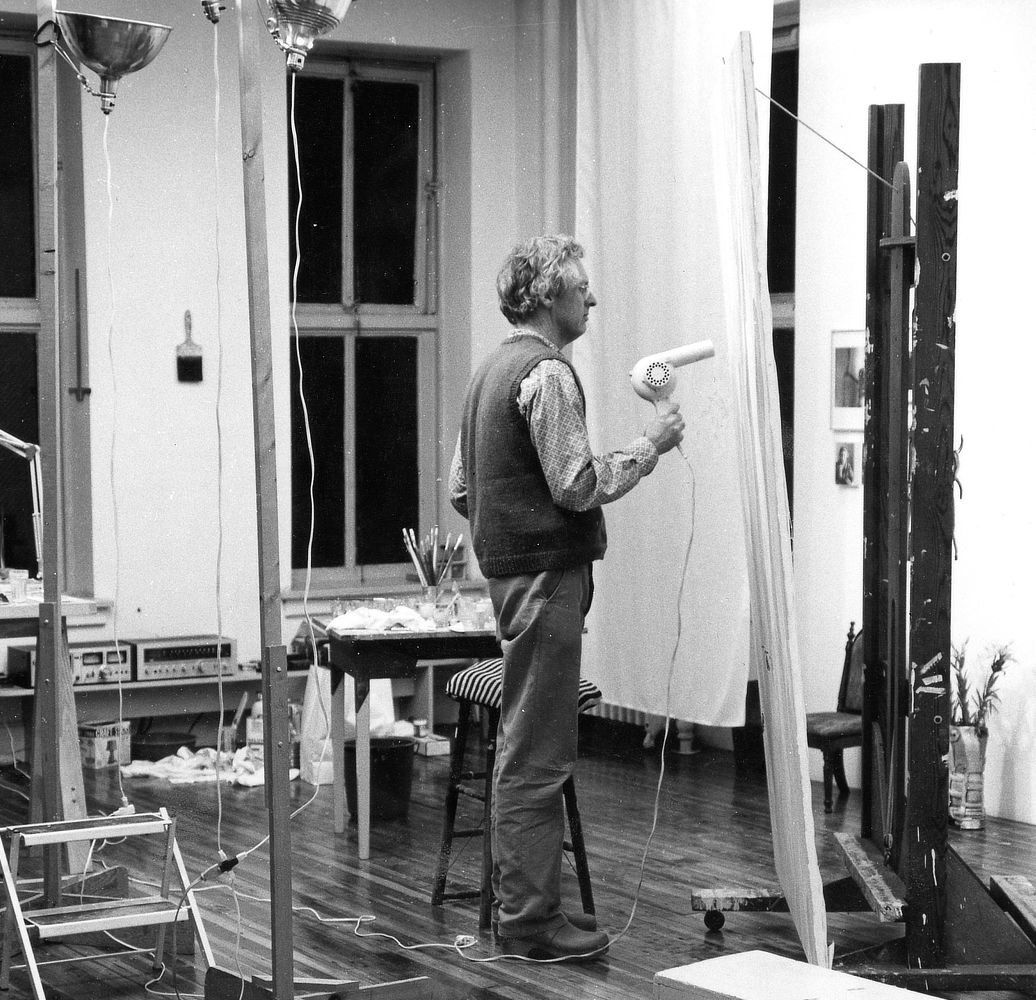 George Woodman in his studio, New York City, circa 1980s.

"It was daunting to move into the cavernous studio [Tuscany, 1965-66] occupied by the sculptor Adolf von Hildebrandt nearly a century earlier. Surrounded by casts from the Parthenon, I began timidly with a little geometric painting. Freezing in winter, I burned lumber scraps in the round stove and learned to paint with gloves on. The high window gave me sky and the tips of cypress trees. I came to love this great vaulted 16th century room. The sculpture I learned to ignore, little realizing that 30 years later many paintings would be based on it."

George Woodman (1932 – 2017) was a photographer and painter whose career spanned more than sixty years and included forays into diverse visual media. Woodman was deeply influenced by classical and modernist traditions. He was committed to explorations of color and abstraction in a variety of forms - landscape, geometric, and patterned - before pivoting toward the figure, sculpture, and architecture.
‍
Woodman was born in Concord, New Hampshire. He graduated from Harvard in 1954 with honors in philosophy and received a Master of Fine Arts from the University of New Mexico in 1956. He married the artist Betty Abrahams in 1953 and after two years in Albuquerque, New Mexico, they moved to Boulder, Colorado in 1956 where he taught painting and philosophy of art at the University of Colorado for thirty years, becoming Professor Emeritus in 1995. He was an influential professor and artist in the Colorado scene in the 1960s and 70s, associated for many years with the Criss-Cross Art Communication movement and a founding member of the seminal Spark Gallery.
‍

With his wife and children, Charles and Francesca, Woodman first visited Italy in 1959 and returned in 1965 on a University of Colorado Faculty Fellowship. Woodman was profoundly affected by Italian sculpture and architecture and painted daily surrounded by casts from the Parthenon in his 16th century studio. He received an NEA grant in 1967 and he and Betty bought a farmhouse in Antella, Italy in 1968, where he kept a studio and returned for part of every year for the rest of his life. George and Betty bought a loft in New York in 1980, and began dividing their time between Boulder, New York, and Antella.
‍
Woodman began his career as an abstract painter, best known for his formally inventive tessellations and complex understanding of color. In the 1980s, Woodman’s paintings turned toward classical figuration, and he began making black and white photographs of nudes in classical architectural and sculptural settings. At this time his work with patterns developed into compositions in painted ceramic tile, with major public commissions in Detroit, Michigan; Denver, Colorado; and Buffalo, New York. After retiring from teaching in 1995, he lived half of each year in Antella and half in New York.
‍
Woodman’s work has been exhibited throughout the United States, Europe, and Mexico since the 1970s, including Patterning and Decoration, Museum of the American Foundation for the Arts, Miami, Florida, 1977; 19 Americans, Guggenheim Museum, New York, 1981; More than One Photography, Museum of Modern Art, New York, 1992; Pitti Rivisitato: Fotographie di George Woodman, Palazzo Pitti, Florence, Italy, 1997; Imagenes de Tiempo, Sensibilidad y Sombra, Museo del Chopo, Mexico City, 1999; Photographs of George Woodman, Amethyst Gallery, Chennai, India, 2001; and Camera Obscura Photographs, Grand Arts, Kansas City, Missouri, 2004. A retrospective of forty years of Woodman’s painting was presented at the Bemis Center for Contemporary Arts in Omaha, Nebraska in 2006.

An accomplished writer, Woodman published critical texts and catalogue essays in addition to four books: Museum Pieces, 1996; The Further Adventures of Pinocchio with poems by Edwin Frank, 2004; How a Picture Grows a World with poems by Iris Cushing, 2010; and Metaphysics is to Metaphor as Cartography is to Departure, 2011.