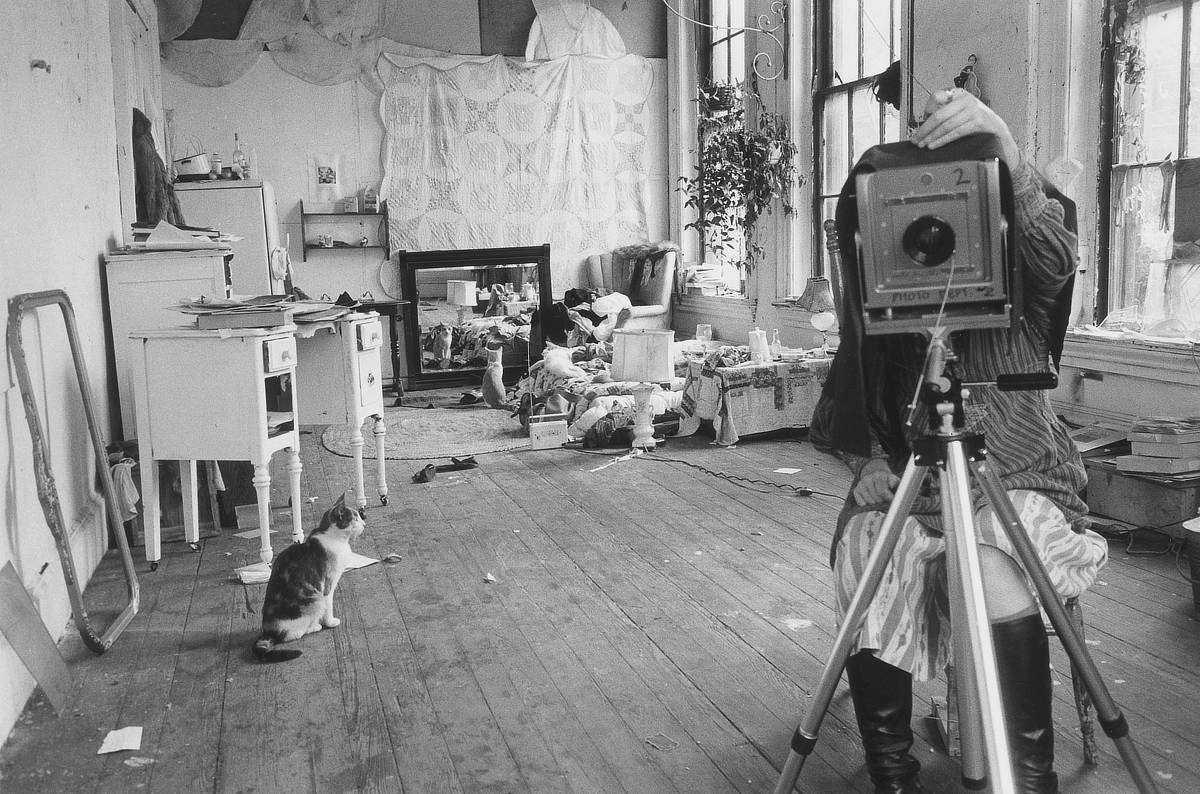 "I would have waited six months and then read books, letters, slept in blankets and have been my own archaeologist for this lost bit of civilization – this attic ghost. People don’t turn heads much up or down. I like to watch cats who move their whole heads to see and try to do so too. Perhaps improve circulation to the mind thus."

Francesca Woodman (1958 - 1981), a prodigious talent, made her first mature photograph at the age of thirteen and created a body of work that has been critically acclaimed in the years since her death. Born into a family of artists in Boulder, Colorado, she attended public school there. She also spent much of her childhood in Italy, including attending second grade at a public school in Florence and most summers in Antella starting in 1969. Woodman was immersed in and influenced by Italian art, architecture, and culture throughout her life. In 1972-1973, she attended boarding school at the Abbott Academy in Andover, Massachusetts, where she discovered photography and began to hone her craft in earnest. She attended Phillips Academy in Andover in 1973-74 and then returned to Boulder, where she graduated from high school in 1975.
‍
Much of Woodman’s work was produced as a student at the Rhode Island School of Design in Providence, where she studied from 1975-1978. Her sophisticated understanding of photography and her artistic maturity were evident. During this time she had solo exhibitions at Addison Gallery of American Art, Andover, Massachusetts in 1976 and her thesis exhibition at Woods-Gerry Gallery, RISD, in 1978. From 1977-78, Woodman lived in Rome as part of the RISD Rome Honors Program, presenting a solo exhibition at Libreria Maldoror in 1978. She moved to the East Village of New York in 1979 and spent that summer in Stanwood, Washington. In New York, she became interested in commercial fashion photography as a way to potentially support her fine art work, producing a number of “fashion” photographs in 1979 and 1980. She was a fellow at the prestigious MacDowell Colony in New Hampshire during the summer of 1980, after which she returned to New York and continued developing her series of large-scale diazotypes printed on blue or sepia architect’s paper. During her lifetime, Woodman was included in group exhibitions at Galleria Ugo Ferrante, Rome, 1978; Daniel Wolf, Inc, New York, 1980; and the Alternative Museum, New York, 1980, where she presented the Temple Project. This work, the largest and most complex from her diazotype series, comprises photographs of herself and friends as caryatids among photos of classical architecture and interiors and is now in the collection of the Metropolitan Museum of Art, New York. Her artist’s book, Some Disordered Interior Geometries, was published by Synapse Press in 1981.

In 1985, art historian Ann Gabhart, with Rosalind Krauss and Abigail Solomon Godeau, organized the first solo museum exhibition of Woodman’s work, which was presented at the Wellesley College Museum, Massachusetts and Hunter College Art Gallery, New York, among others, in 1986. This seminal exhibition began a robust museum interest in Woodman’s work that continues in the present. Other notable solo museum exhibitions include the Fondation Cartier pour l’art contemporain, Paris, 1998, which toured throughout Europe and a major U.S. retrospective at San Francisco Museum of Modern Art in 2011 and the Guggenheim Museum, New York in 2012.  Francesca Woodman: On Being an Angel was organized by and presented at the Moderna Museet, Stockholm in 2015 and travelled to several European cities. Woodman has been included in a multitude of group exhibitions throughout the United States, Europe, and Latin America and her photographs have been frequently reproduced in books, catalogues and other publications.